You are here: Home

The oxidase test (indophenol cytochrome oxidase) was first described by Kovac  as a useful test for thedifferentiation of Pseudomonas spp. and the Enterobacteriaceae. The test is based on the production of anintracellular cytochrome oxidase enzyme which activates the oxidation of reduced cytochrome by oxygen. The oxidised cytochrome then acts as an electron acceptor in the terminal stages of the electron transfer system. This system being an integral part of energy production within the bacterial cell.

Artificial substrates such as phenylenediamine may be substituted for the natural electron acceptors producing a coloured end product in its oxidised state.

Although a simple test to perform, care must be taken to ensure that a correct result is achieved. To minimise the potential errors associated with the performance of this test, Microgen Bioproducts has available a standardised and stable oxidase strip (MID61g) for the detection of cytochrome oxidase in bacteria including gram negative bacilli and Neisseria spp.

2. Performing the testWhenever possible the test should be performed by removing a single colony from the culture media using either a platinum wire, glass rod or wooden applicator. Care should be taken not to carry over any of the culture media. The growth removed is applied to a fresh oxidase strip.

A positive result is indicated by development of a dark purple colour within 5 seconds. If the test is left too long before reading, many oxidase negative organisms will produce positive results. Some organisms do possess a small amount of cytochrome oxidase and may produce a weak or delayed positive reaction (10 – 15 seconds)

Ask a question about this product
Back to: ID Reagents
You may also be interested in this/these product: 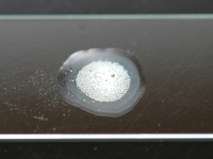 Catalase Reagent is useful in the presumptive identification and differentiation of many bacteria.

Microgen GN-ID A & B
Sales price:

ID of Bacillus spp in Foods

There are yet no reviews for this product.

Disclaimer: The demo content provided with this template is for demo purposes only. All content (C) the original authors.